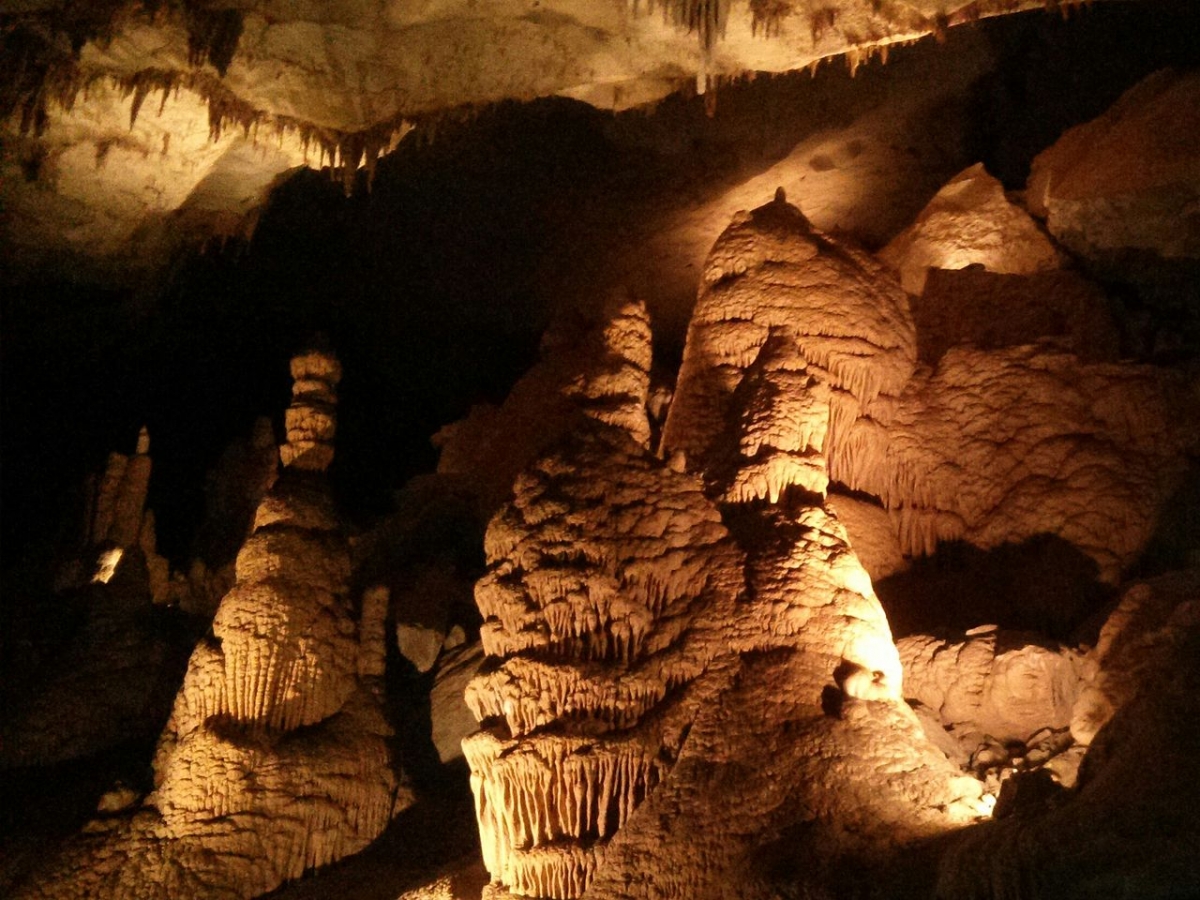 Cumberland Caverns is located in McMinnville (within 20 miles of Cunningham Cabins) and is an operating show cave. It is a national natural landmark. It is the second longest cave in Tennessee and makes the list of longest caves in the United States and in the world. Stalagmites, stalactites, helictites, flowstone, cave pearls, botryoidal coral, gypsum flowers, needles, and pure white gypsum snow, as well as a wide variety of cave life are inside.

The main entrance was discovered by Aaron Higgenbotham in 1810 while he was surveying the nearby Chickamauga Trail on Cardwell Mountain in what is now Warren County. According to legend, Higgenbotham was the first man to enter the cave and it was named Higgenbotham Cave in his honor. Another smaller cave, also located on Cardwell Mountain, was also discovered about this time and was named Henshaw Cave. Although not nearly as big as Higgenbotham Cave, Henshaw Cave proved to be a source of saltpeter (the main ingredient of gunpowder) and was operated as a saltpeter mine during perhaps both the War of 1812 and the Civil War.

Higgenbotham Cave became a favorite spot for local adventurers during the 19th century and groups would ride out to the entrance in hay wagons and make the strenuous trip to a point in the cave now known as the Ten Acre Room. In the days of the hay wagon parties, it was called the Big Room. Here, many visitors left their names and the date candled on the ceiling.

In the early 1940s, members of the National Speleological Society (NSS) began to explore Higgenbotham Cave began. Within a decade, they had greatly increased the known extent of the cave. In 1953 a connection was discovered between Henshaw Cave and Higgenbotham Cave. This connection was named the Meatgrinder because of its small size and shape. Soon afterwards, some of these explorers leased the cave from its owner, Mr. Andy Powell, and developed it into a commercial cave. The cave opened under the name Cumberland Caverns on July 4, 1956 and has been open to the public since that time.

The Cumberland Caverns company offers year-round commercial tours of the cave, claiming it is the largest show cave in Tennessee. Tours include a daytime walking tour, spelunking tours, overnight tours, and educational field trips. Weddings, banquets, and birthday parties are also hosted. Before reaching the cave, tourists pass through a gift shop that sells tour tickets, souvenirs, and novelty items.

Cumberland Caverns is home to Bluegrass Underground, a monthly music event that takes place in the cave’s Volcano Room. The event has become a nationally syndicated program airing on PBS.

Cumberland Caverns formed in Mississippian Montegeale limestone on the western escarpment of the Cumberland Plateau.[10]

Formations of interest within the cavern include:

– the “Volcano Room,” where many of the cave’s commercial events are hosted.
– “Monument Pillar,” a large flowstone formation.
– “Crystal Palace,” which contains crystals and gypsum flowers.
– three spelunking tunnels known as “the Devil’s Backbone” due to their winding spine-like walkways.
– the “Lemon Squeezer,” so named because its widest point is only 11 inches (280 mm).
– “Bubblegum Alley,” a passageway similar in size to the Lemon Squeezer but with damper ground that makes it sticky.
– “the Hall of the Mountain King,” whose dimensions of 600 ft (180 m) long by 150 ft (46 m) wide by 140 ft (43 m) tall make it one of the largest cave rooms in eastern North America.